When contemplating the development of the Western drama theory from Aristotle to modern authors, one could define it most concisely as “From Metaphysics to Technique”. That development 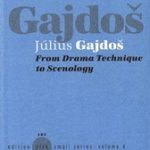 reached its apex in the 19th century in Freytag’s Die Technik des Dramas and in Polti’s famous Les Trente‑Six Situations Dramatiques. It was the letter treatise that became for Július Gajdoš the point of departure in tracing further (modern, post–modern) development and possible outcomes entrained in the question: “Does it still make sense to cultivate theory of drama?” When following the two lines in theory of drama, in which one may be called the scientific (or the noetic) one and the second may be described as the anthropological (or ontological) one, ‘situation’ and attitudes of the various theories to it are for him the key concepts. It is, after all, primarily situation that links drama in theatre to drama in the world and in life, as much as it links theory of drama and theory of theatre, linking even drama and theatre, that is not and does not wish to be a mere illustration of written text. As the author himself wrote in the closing part of his study, “This is why from the perspective of one, and to my mind a key one, term of dramatic situation I adverted to some findings and mistakes in theory of drama that have been reached during the last two centuries, and also to contemporary points of departure of the Czech theory, as well as to that line of thinking in it, which is – unlike that of structuralists – relatively unknown abroad, even though it could become an important impulse for European theoretical thinking about drama and theatre”, mainly due to the comprehensiveness of the point of view employed.

The book is prepared by the Research Institute of Dramatic and Scenic Arts at the Theatre Faculty of the Academy of Performing Arts(AMU) in Prague for the Centre of Fundamental Research of AMU and MU (Masaryk University) in Brno. Publisher: Nakladatelství KANT – Karel Kerlický for Academy of Performing Arts (AMU) in Prague. ISBN 978-80-86970-32-5. Orders: kant@kant-books.com.